Reposting from what was chapter 112….fucking nazi FFNet…

In the insurance industry, this is open-enrollment season, where people have to get their coverage for the year finalized. That means from now until New Years will be utterly crazy. I’m not sure how much updating will get done between here and there, aside from the next STG Investigative Report which will come out Christmas Eve as a present to my readers.

So, since I’m wasting an entire chapter on an author’s note, I’d like to take time to give thanks to the people who gave me the inspiration to write this much. Without them I would have stopped writing this train-wreck a long time ago. All have encouraged me to continue this effort through messages, PM’s, and ideas. Especially after the loss of my job and my mother’s illness, as well as certain people who dislike AU’s, your words were very important to me.

I appreciate EACH and EVERY review I get, so please, if your name isn’t on this list don’t be offended, it just means I haven’t used an idea you’ve given me.

Above all else, my personal heroes:

Jay8008 ,who says I inspired him to write, good god

Setrus, the Maestro of settings, and who changed my opinion on Tali

Melaradark, which started me thinking about a ‘dark’ Shepard in the first place.

Progman (should get a co-authors credit at this point)

SherryE (One of my oldest fans. Totally getting a cameo somewhere)

Hewhoislost (You simply MUST read Two to Tango)

S058 (who left much encouragement)
NarwhalWarlord (Still not on your favorite author’s list , I see :/ )

KeithFraser (If you go in for Code Geass, btw, an EXCELLENT author)

There will be two or three chapters prior to Ilos, then Ilos takes up at least two. The fight at the Citadel is likely to be five or six chapters long, the aftermath two or three. Then there is the post-story and Bring Down the Sky (which is utterly changed), culminating in an epilogue.

If all goes well, OSABC II: Downfell (may change that title, ideas are welcome) should see revision outlining completed by late January and the prologue chapters as early as February. Estimated length is 140 plus chapters clocking in at around around 800,000 words.

The Cerberus Files will be worked on as I get research done (I’m about a quarter of the way through the turian research. Studying birds, Roman military stances, stoicism, Romanian and Balinese history, postmodern super-flat art, and the effects of cosmic radiation on amino acid chains…it may be a while).

The next two works will come out around May/June 2014. I will also (finally) update the Reaper doc (Fear Unrelenting, Seen Darkly) after ME 1 is complete.

I didn’t want to launch the story without backstory. One of the things that pissed me off is that we’re tossed into ME with no real grasp of what is happening or why it is significant.  So the earlier chapters were to set the stage, so to speak.

The very earliest drafts had things following canon almost exactly, which was already bothering me. I first departed from canon in a major way in Chapter Five, by linking Saren and Benezia romantically.

Others have done it, in a frankly confusing manner. I won’t even touch on those stories that have ships between Saren and Nihilus (possible, I suppose) or Saren and Shepard (wtf) or Saren and goddamned Anderson…

There is never a flamethrower around when you need one. ooh. New Commissariat quote.

At any rate, the first chapters are pretty pathetic. They don’t have the pop of later chapters, and they should probably be rewritten at this point. Full of grammatical and punctuation errors, I did a quick pass over some, but they need more attention and detailing. 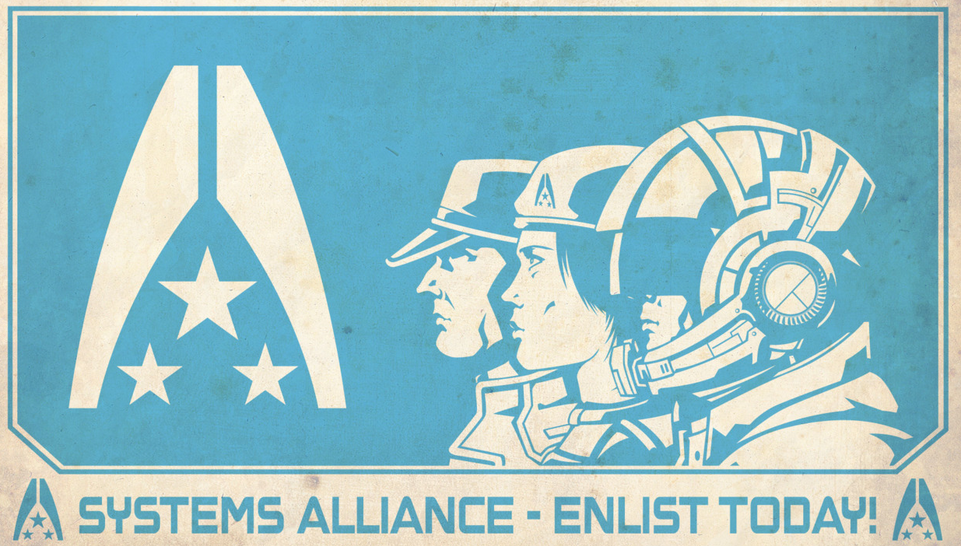 When I started OSABC, it was from a toss off line I wrote into a shortfic about Liara talking to her mother, the full conversation instead of the snippets you hear in the game.

Garrus and Shep were talking in the battery, with Shepard hugging Garrus after hearing about his family. He addresses her as ‘sheep’ and she calls him ‘battle chicken’. Old nicknames, heavy with subtle meaning and nonsensical applique.

They rang something in me, and before I knew it I decided to try my hand at writing a longer fic. Mind you, my skills were (and still are) rusty. I haven’t written professionally in over fifteen years at the point I started this mess, so the first chamber was shambolic and symbolic.

I wanted to frame my AU in the same way the game started. And I knew I wanted to write an AU.

People nitpick the ending of ME3 and let slide the mountain of other shit that Bioware messed up on. Things had bothered me for  a while and I decided to act.

When I say my stories are an AU, I don’t mean something along the lines of Renegade Reinterpretations. RR is wonderful and grandiose, a merging of events that I doubt I could ever pull off, but it still adheres to the basic concepts of everything wrong with Mass Effect.

Don’t get me wrong, I love the game. But the whole reason there are so many fix-fics is that Bioware drops the ball in lots of places. Romances that feel too much like random banter then schmex. Plotlines that weave, bob and then vanish into thin air. Characters who come out flat and without real human depth to them.

Worst of all, the awful and frankly inexcusable failure of Bioware to characterize the bad guys. I’m not saying I’m a better writer than Bioware. It’s pretty easy to take all the tools they did from scratch and recombine them and polish them. Mass Effect is amazing. But the holes in it, the cliched way they slavishly stick to the Space Opera format, leaves much to be desired.

ME1 gave us Saren, a clearly defined bad dude, without any real explanation for his actions. He is a cipher. We get a single, short cut-scene (of some nice tits, mostly) without context, then some random bits on Virmire, and a rant on the Citadel.

From this, this hero who has let himself be dominated , sacrificed his honor, turned his back on his species, and shot a close friend – from this we’re supposed to believe a random person from a race he despises is going to undo heavy indoctrination with a few pithy lines?

No, no, and no. Saren isn’t the Master of Fallout, and Shepard isn’t the Vault Dweller. But even a cockeyed as that gets, as least there are clear villains – Saren, and Sovereign.

ME2 gives us a concept as a villain – trust Cerberus or no, fight the Mysterious Bug People who are snatching colonies in the middle of nowhere and be a Frankenstein monster. But it never really clarifies why these things happen, or why everyone has daddy issues all of a sudden.

And ME3 sets up a major confrontation that turns into a giant colored dialogue wheel. It’s not that the story is bad, or the endings are bad, it’s that it makes no sense.

I also wanted to present an image of the “other Shepards”, warped ones. By the end of that first chapter, I knew something was seriously wrong with my SA, and possibly my entire universe.

A lot of the changes and alterations (or mutations) made along the way have altered the specifics, but there are still three main points my fic should hit:

First off, your fair warning: rated X for xtremely fucking foul language, uncensored sexual terms, xtensive rambling of a nature that will not make much sense, and xtraordinarily boring if you aren’t following my stories (or stalking me.)

For the sake for form and redundancy, I will reguritate my blurb on FF.net here!

I write stories about Mass Effect, and Naruto. I am otherwise utterly boring, but since people keep pestering me…

I’m in my 30’s and I live in Texas. I’ve gone through some traumatic events in life (divorce, suicides, wife dying, mother having cancer, friends dying in war) that allows me to write about such things based on experience. I’ve studied biology, anatomy, cultural anthropology, psychology, geology, physics and chemistry, and I’ve dabbled in emergency medicine, transport, insurance, telecommunications and publishing. I was in the Navy for four years and did my service in the Submarine Force.

I’m a non-denominational Christian who believes firmly that what you say is far less important than what you do, and the appropriate place for religion is in my heart and not splattered over a venue where people come for entertainment. That being said, please do not ask me to read things that are insulting to my religious beliefs.

I’m a black man, which is appearantly unusual in fan fiction, as I’ve only run across a few others, and they’re just as fucking crazy as I am.

I write to entertain a few people, above all others Owelpost, who is half the reason I’m still writing. I am a massive Melaradark and jay8008 fanboy and if you don’t read their works there is something wrong with your brain.

I am a cynic , a romantic, and a pessimist. Go figure. Murphy was an optimist.