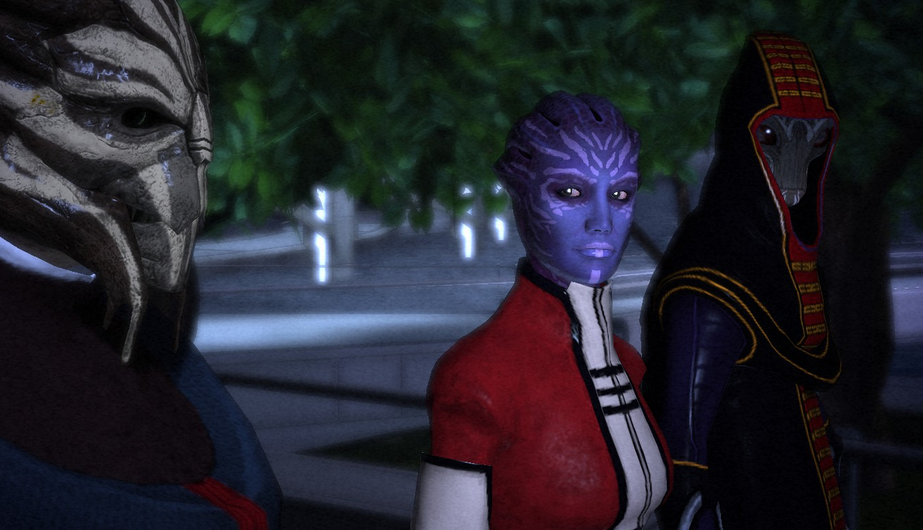 The one question I get over and over is ‘Why isn’t anyone seeing what is going to happen?’

It was a question many asked in canon ME, and simply because the Premiseverse is not canon does not mean I have dismissed the very good points Bioware raised in their own storytelling.

And it is important, if you read my work, to understand this, as it is perhaps critical to understanding why things happen the way they do in the Premiseverse.

At the end of the day, there are three things that blind people to seeing what is going on around them, no matter what situation, culture, race, or time period they live in.

The first and most commonly cited reason (or excuse) is institutional arrogance. Or Ahern puts it, assumptions. But the leaders of society are not merely chosen because they are charismatic or able to mobilize money and influence. Most of them — despite what you may think by reading the internet — actually are efficient planners and thinkers, with enough vision to see trends (or else they are swiftly out of office).

More than one person has commented how much more ‘competent’ my Council is over the canon one, and how much more effective Udina is. That’s mostly because the Council members in canon ME were a bad literary device, the Obstructive Bureaucrat. Such people exist in real life, but almost never at the highest levels of political control, because you put people like that in places to block access to those levels, not to make them worthless.

There were other issues (see further below on context) but the bottom line remains that, at least in canon ME, the polticians wanted to be blind as not to have to deal with problems that would make waves.

This isn’t the case in the Premiseverse, because of the ugly fact that most of the Council members are more like puppets. Their only real task is to keep the galaxy from flying apart into open war, and they are very good at it. So our answer as to why people are blind is not merely institutional arrogance.

A second common explanation is that the problem is one of sheer outlandishness. Politics deals with the here and now, and even after seeing a big black ship thing attack you, you may not go ahead and decide that more of them are on the way. The premise shoved down our throats in ME was bad enough, but how TIM somehow linked the disappearance of humans to Reapers in ME2 without any clues whatsoever (that we ever saw) was even stupider.

I cannot think Bioware wrote this badly on anything but deliberate intent. And it should be easy to see why. They were building a story to explain why things happened, but the narrative changed several times, from mysterious cthuloid monsters, to conspiracy laden plots and suicide attempts, to weirdness with dark energy, and finally to whatever the fuck that ending was supposed to mean. You can’t have a coherent story that contradicts itself, and the only way to hide those contradictions was to make everything seem … well, unfeasible.

Shepard HAD no options in Canon ME to do much of anything. The player was railroaded at every step of the process , and the illusions of choice given had very little effect on the final outcome. As such, being dismissed as crazy and having any evidence produced dismissed was not a choice by the people involved but rather the requirements of the text, and can’t even be analyzed.

We’ll leave aside the first two, because while they explain things, my own preferred reason fits better.

No one saw it becuase of one thing, a simple  lack of context.

It is impossible for a medieval culture to know it should be preparing for the cometary strike that is coming if they can’t understand orbital mechanics or the nature of what a comet is.  Even if they knew that ‘the world would end’ on a certain date, what could they feasibly do to prevent that?

Lack of context can be found in both canon ME and PVME. The context is not, as some people assume, Reapers. The context is the scale and scope of the threat,and the political cost to face it.  People sneer at this concept because they have never run for office, or realized that the vast majority of humans (and I can’t see most aliens being much different) are focused on the here and now.

Given the omniscient viewpoint, it is all too easy to simply lambast those in power to being blind as to context. But consider: right now on the Web, there’s a series of articles about the mathematical certainty that a civilization-wrecking cometary or asteroid impact will happen on Earth in the next century. We have the technology to avoid this. We have the resources and knowledge to colonize another world if we research it and push it. The danger is not some pie in the sky imaginary thing — it WILL happen.

Yet nothing is being done to address it, and I doubt it will. The financial cost is too high. People will point to all the other problems we have. It would require sacrifice, it would require a great deal of moving energy and money away from our entertainment, our wars, our self-absorbed internet culture to undertake such a thing.  The danger is real…and yet no one who sees it has access to the levers of power.

If we knew a comet was going to hit us in a century, and had an exact date, perhaps we would be motivated. But we don’t. It will be handled ‘in the future’. Someone else’s problem. No context. We’re too busy wondering what appalling stunt ISIS will pull next, or watching music videos, or reading fan fiction.

In canon ME, the problem was Shepard, despite being a good soldier, was an idiot when it came to being an intelligence agent — which is inexcusable when partnered with a goddamned DETECTIVE. Shepard didn’t make an effort to bring back evidence or proof of her findings, instead relying on the sadly common military mindset of ‘identify the threat, report the threat, and let the chain of command determine how to deal with the threat’.

Without evidence, you can’t have a threat to identify aside from vague reports. Without any form of context, the choices made by the council are suddenly not merely political ass-covering out of arrogance, or even bad storytelling, but the sort of reactions that ANY person in a position of power makes when told something they can’t do anything about.

In the Premiseverse, no one knows when the Reapers will get here, or if they are coming. It could be six years, or six hundred, or six THOUSAND. To prepare for their arrival now would throw the galaxy — already in a state of chaos — into more chaos. And while Shepard had enough evidence to back up her claims of the Reapers being real , what she didn’t have was the context to say “they’re coming in X years.”

Passing the buck is that thing everyone sneers at , and yet everyone has a tendency to do. You’ve done it. I’ve done it. We’ve all done it. Is it surprising the Council would?

2 thoughts on “On Why the Council is Dumb”