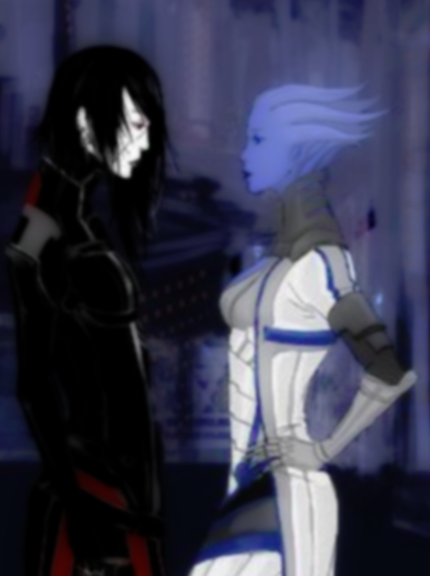 The reunion of two lost people illustrates that which cannot die should not be vengeance, or despair, but love. And yet nothing of value was built without pain and struggle and even loss.

I’ve long given thought to the structure of my fan fiction, given that it was intended to ‘fix’ the stylistic flaws, plot holes and shortcomings of the original Mass Effect storyline.

By the very nature of it being a video game, some of those shortcomings were by nature, and the series should get a pass on those. Others were due to changing directions of the writers and directors, still others were due to what I can only assume were bad choices in how a scene was storyboarded.

But the way OSABC has developed lead to a new line of thinking, one I long pursued with Progman and Owelpost in the start, and more recently with nimiraj, Quentin and others — the nature of Liara and Shepard, and what it means for them to reunite.

I went down a very… extreme path in terms of ‘bringing the gang back together.’ This was done on purpose, but also to remove the almost railroaded feeling of how the game reunited you with Garrus and Liara.

One of the most fundamental questions I struggled with when outlining this trainwreck was how to put Shepard and Liara back together again. There were several ideas:

The final choice is sort of what I’ve gone with, mainly to deal with a pair of ugly fundamental questions:

First, what is the nature of ‘love’ when an asari bonds with another being? Is it mind control or natural and real? Doesn’t the fact that two minds are interlinked in this fashion sidestep all the things love is supposed to be about? If the bond is broken, is the remaining affection and love one feels ‘real’ or an artifact of having one’s mind forced into connection?

Two, is fate and destiny real, or is everything merely chance? Are you fated to a particular soulmate, a person who completes the person you want to be or should be — or is everything random, love the biochemical randomness of survival instincts? Is there any greater purpose to why one suffers so much for love, or is it mere mortal choice?

I do not plan to make things ‘easy’ for Shepard and Liara. I intend very much to explore the nature of the bond, how it works and doesn’t work, and what happens when two people fundamentally change in outlook and thinking and yet want to come together.

It may displease people, especially those who want pure romance. And yet, I think in the end a relationship that is forged from shared pain and effort and working to truly get another person is a more honest and mature way of looking at things than mind magic.

In a way, the title of the story, That Which Cannot Die, could be interpreted to mean lots of things. It could be Shepard and her friends. It could be the idea of decency and doing what’s right is immortal. I could make an argument that the title applies to revenge, or justice, or even destiny.

But ultimately, the title should refer to the love between two people, who are neither perfect nor whole, but who in the end create something greater and more beautiful than the sum of its parts. Love does not die. If it withers, if it fades, if it surrenders to the mists of time and memory, that is the choice of those who let it go — and if you never let it go, it is always with you.