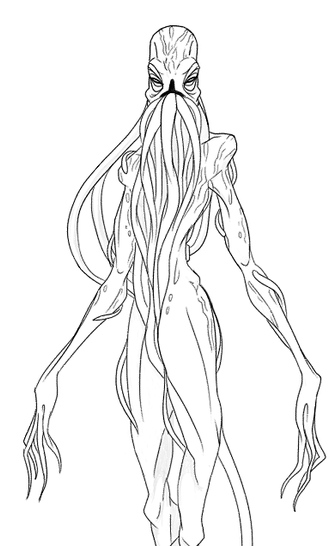 The curious thing about all the old ancestral myths is how dickish all the gods were. The Greeks were the Clash of the Douches, with rapists and what not. The Egyptians were flat out creepy, tearing apart the gods bodies. Even old Indian trickster deities like Coyote were often deeply disturbing.

I can’t help but wonder what aliens far older than our entire race must be like.

Very few Mass Effect fan fictions take up the trouble to ‘scribble in the blank spots’, as it were, outside of the framework of the games. This is hardly surprising — most fan fiction is about working with what is established, either in new ways or new views or what have you.

Outright world building is rare, and doing so on a time scale of millions of years seems pointless to most. Yet there are so many hinted at but ultimately unanswered questions even in canon ME that I can’t help but want to find answers.

The Inusannon play such a role. They are perhaps the most striking of the races I have tampered with, even though the big reveals will only happen in ME3 and ME4 pieces of my books.

They had technology and abilities we couldn’t match, colonies in other galaxies, and could create machines like Vigil — and they still lost. What chance, then, does modern society, with its squabbling and stupid acts, have?

The key to understanding that question is to realize you are asking the wrong question. As it was said in Wargames, the only way to ‘win’ is not to play at all, a concept they quickly identified.

The Inusannon understood that the Reapers had been at this for millions of years, and were not going to fall for dumb shit like fleeing to another galaxy (never mind Reapers already infested every nearby galaxy). They weren’t stupid. Neither were the Tho’ian. So they made choices and actions that fit what they knew the Reapers expected, and took a Third Path out.

Why is this important?

Because, despite all the foreshadowing I will try to do, it is likely to come out of left field much like the Starkid did at the end of three. The Inusannon are not a simple Deus Ex Machina — they cannot stop the Reapers now any more than they could back then. But they are capable of understanding more and seeing more than today’s races do, and making sense of what they saw.

The Inusannon tampered with many races. So did Leviathans (all three groups). So did Protheans, and so did the races before Inusannon. But the Inusannon did not tamper with races trying to make a weapon.

They instead wanted to make sure that when the threat was passed, nothing else would simply rise up and cause them problems again. And some of the steps they took they hid in the plainest possible sight.

Forerunner races are often given a group of traits — ancient technology, mysterious vanishing, can pull shit out of their hat, a single, ancient survivor by way of X, blah blah blah.

The Inusannon defy that. Almost none of their tech is even known, much less released — a lot of it, like Tho’ian tech, was biological in framework and literally rotted away a long time ago. Moreover, the Inusannon, taking cues from the Reapers, set up their own method of monitoring the situation as it developed, even if the method used wasn’t aware of it’s purpose.

So when people ask me things like “Why can’t you just have Vigil give Shepard kick ass weapons”, it is for two big reasons.

The first is the mystique factor. The more I reveal about the Inusannon, the easier it is to eventually figure out how this mess ends up. So it has to come at the appropriate time in the story.

The second is more story based. The Inusannon made a decision that the Reaper situation should not be altered, be that for good or ill. They did not, once they understood WHY the Reapers did what they did, try to stop them. They simply … got out of the way.

But if they come back, they won’t be a threat if everyone has the tech they did.

Most importantly, making the Inusannon living ass-pulls flies in the face of what I see them as — horrible, horrible trolls.

They knew full well the Reaper threat, and decided it was the better part of self-survival to simply shield themselves from the outcomes rather than actually warn anyone of the coming danger.  With their technology they could have easily destroyed the Citadel in the thousands of years after Reapers retreated to dark space.

So why didn’t they? Because they saw the concept of the snare that catches the hunter and not the hunted as hilarious. This is also why they didn’t fill Vigil in all the way, or let their creation know their real plans.

Ultimately, the Inusannon should be seen as a vaguely defined threat, not heroic and willing to co-exist for long periods of time.

13 thoughts on “On forerunner concepts and the Premiseverse”