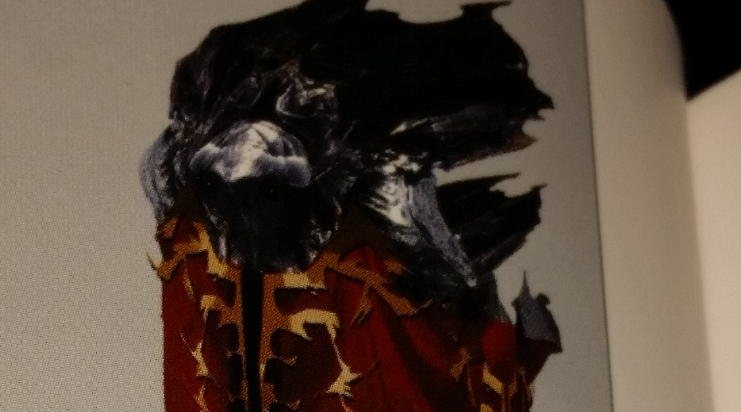 Horror is like a serpent: always shedding its skin, always changing. And it will always come back in the way you least expect it, catching you by surprise.

The funny thing about ME2 is how much sheer potential was allowed to fall by the wayside, and how easy it is to put it back where it belongs.

I’ve had more than one person ask me about why the Collectors wear robes in my story. That’s because they were originally designed that way. The image is from a picture I took from one of the ME Art books.

I have a hobby in collecting the ‘art books’ that come with games. The ones for ME, ME2 and ME3 were particularly fascinating as they showed a ton of content that had been sidelined, ignored, changed or re-shifted to fit the game we know today. Some of the most profound changes came in the ones made to the Collectors.

Sure, the Collectors of the games are creepy — giant insect flying things with glowing eyes, bug-like clouds and weird ships. But they simply don’t back up their smack. Unlike the geth of ME1 and the Reapers of ME3, even on insanity Collectors simply fail to truly cause terror. And in the end, it’s shown they are little more than tools, perhaps without even the ability to alter their fate.

I really have no damned clue what Bioware was intending for them, but it doesn’t matter much as I’ve changed up the nature of what they are. The Collectors will be the first ‘taste’ of the true power of the Reapers, and all the crazy big resources I’ve thrown at Shepard in the lead-up into TWCD will be used and probably not enough to take down the threat. But I also want to explore what it means that they survived, and give a hint of why Saren and Benezia felt the way they did.

I’ll do that in three ways.

First, the Collectors are actually going to demonstrate the crazy technology we keep hearing they have. I won’t spoil anything, but the goal is to make the technology of the Collectors as creepy, sickening and unnatural as the bug-men themselves. Given their tight resources, they are masters at recycling biomass and wreckage, and some of that will bleed over into their tech.

Second, I want to give them a rationale for both continuing to exist and a reason for their activities. We’re told in ME2 that they are twisted, indoctrinated Protheans. But the Codex later tells us that the Reapers left the indoctrinated Protheans to die, so someone is confused. In my version, the purpose of indoctrination remains to break minds and make them obey. But the Reapers are managing more than one galaxy and they need tools to monitor events, identify the best choices for ascension, and act as a back up in case things go wrong. That can’t be done with mindless remote controlled drones, dammit. So they have … something like a culture. Even in the state they are in.

Finally, and most importantly, the Collectors are there to introduce the idea that some of what the Reapers and Leviathans are doing is simply … beyond our comprehension. Some of the science the Shepard Team will find or have to do will uncover really disturbing things, and even the tiny amount of power the Collectors can draw upon to use will be terrifying to deal with. Nazara was an arrogant ass who was completely unaware until too late that he was being played — if he had known he could have wiped the entire Citadel Fleet by himself with a single use of the Godpower.

The Collectors have an identity as tools, but they are ‘smart’ tools. They are looking for their own answers, and have their own plans separate of that of the Reapers. The Collector General is the son of the Prothean who came up with the Beacon project, after all. They made a gamble when it was clear they would lose, and the destruction of Nazara is the first sign the gamble might pay off.

That being said they would never even think about allying with or working with the ‘natives’. They see the Citadel races as barely any more advanced than vorcha, but they don’t dismiss them as a threat, only as being of any real use.

Ultimately, as the heralds of the Reapers, the Collectors and their goals should be horrifying. If you put a few things together it isn’t hard to figure out just what they are planning to do. But the Collector Agenda adds one more layer of things Shepard has to figure out, and is a big part of the divergence in my AU from canon.