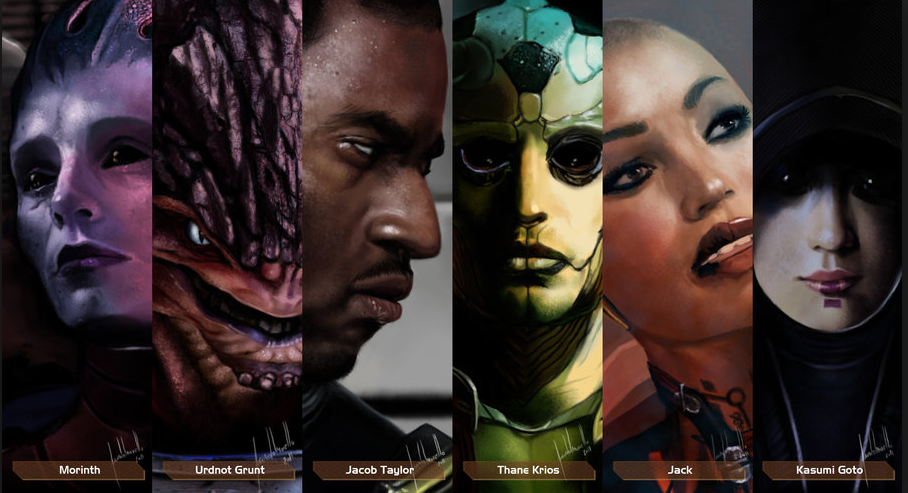 One thing that pisses me off about ME2 is how badly the ball was dropped on so many characters.

With the exception of Tali (walking infodump), I can’t really complain too much about the ME1 cast — they were distinctive, original, and strong. And there were certainly characters that fit that description in ME 2 as well — Mordin, Miranda, Zaeed — certainly the Illusive Man.

But there were other characters —  important characters — that were either neglected or, more commonly, were simply clever writing tacked onto boring, repetitive shit we’ve seen elsewhere.

Urdnot Grunt is not given enough introspective, nor enough of a chance to demonstrate what it means to be krogan outside of mindless violence. Worse, the message is sent that such violence is NOT actually part of the krogan mindset — the calm and quiet krogan on Korlus proves that. Instead of using Grunt’s childish antics to show a softer side of the krogan, we get silliness like a one-ton alien playing with action figures.

Worst of all, Grunt’s biggest failings are highlighted by the glimpses of something else only hinted at,like him reading Hemmingway. Ugh.

Morinth is a criminally badly written thing. Let’s add up the stupid cliches : stupidly hedonistic even after hundreds of years, check. Lack of maturity after hundreds of years, check. Kills a young single white female to establish her as the evulz, check. Vampy, gothy, and playing the victim card, check. Stupidly cliched ‘irresistibly attractive’ statement without any display of such? Double Check.

Who in their right goddamned mind would fuck that, even if you didn’t know she’d eat your brains? Goddamn it, Bioware, at least fucking try.

Bangs you and leaves you for some other chick he knocks up? Check. Volunteers for an assignment he can’t handle in the SM so the black guy dies first? Check. Rejects any attempt by FemShep to actually get him to open up, dismissing it as ‘grade school psyche and a crying jag’? Check.

Supposedly emotionally stable, but comes off as emotionally stunted. And, of course, facial bumps from shaving. Nice. Fucking assholes.

Thane is wasted, more because they crafted him to be ‘attractive to female players’ and to have a goddamned sob story. Repentant assassin with a spiritual side? Check. Soft-spoken and eloquent? Check. Humanoid yet exotically handsome?

Get the fuck out of here. What he tells us about drell culture and his own experiences is so contradictory and self-fellating in it’s calm acceptance of morality being something external to the soul that it’s vomitous. If you have nothing to feel bad about, Thane, why in fuck are you coming along on a suicide mission to redeem yourself!?

Jack is a strong character, but a stupid concept all the way around for two very simple reasons. First, if you are trying to create a superbiotic to serve you, that is NOT how you gain loyalty or even initiate Stockholm Syndrome. Cerberus (once again) comes off looking like incompetent idjits who wouldn’t be able to run a taco stand without killing the entire planet it was on, just so she could have reasons to hate them and be tragic and have runny mascara when she cries.  There is ZERO (ha, get the pun) logic in her setup and presentation. Every bit of it — naked to the waist, the stupid cutscene only biotic power that blows up fucking ZEUS mechs, even her foul-mouthed defiance of Miranda — all of it is to push an image and background that makes no sense.

Secondly, her concept doesn’t work because that is NOT how abuse victims reclaim their body. People who are victimized and abused do not go out and victimize and abuse other people they don’t know, period, fucking ever. They often abuse those close to them, those they say they love, or those much like them — because that’s how they know to interact. They do not become wild pirates playing queen bitch of the hill — their self-esteem was destroyed, how would they find the strength to do such a thing?

Finally, Kasumi pisses me off because they just took two cliches (dashing master thief + ninja) and slapped them together without any more development than “oh her boyfriend died”.

I know she was an add on character, but WHAT THE FUCK. SERIOUSLY. Zaeed had tons of badass background, a completely plausible psychology, a consistent set of moral reactions to the world around him, and a perfectly good reason for being an ice-cold asshole. Kasumi acts like someone stole her out of a fucking anime.

These six characters I intend to change almost entirely. Their backgrounds, motivations, roles, and even classes will change. When I get done with them, they will share very little in common with their canon counterparts.